One of today’s most sought-after string quartets, the Belcea’s regular stomping grounds are the world’s great concert halls. In this rare appearance at an intimate London festival, the quartet will premiere an exploratory programme featuring Beethoven’s masterpieces, the Op 130 quartet and the Grosse Fuge, and related ‘mysterious musical company’.

The performance will last about 80 minutes (without interval) and will be followed by a Q&A between audience and quartet.

A limited number of FREE tickets are available to 8-25 year olds courtesy of CAVATINA Ticket Scheme. To reserve these, choose "Rear stalls" or "Side pews" when booking. 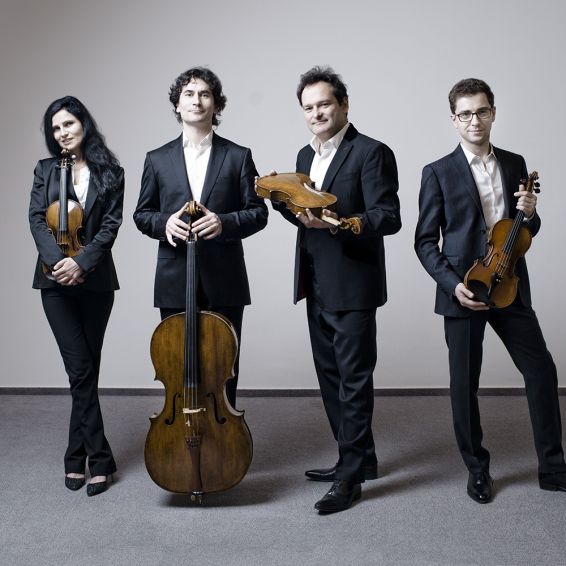 "What seems to be the predominant impulse driving this music is man’s yearning for freedom, the unquenchable desire to expand his limits and to learn the truth about himself in this process."

What the Belcea Quartet writes in the preface to its recording of the complete Beethoven String Quartets could also be described as their artistic creed.These musicians are not confined by traditional boundaries. It is perhaps the very fact of their diverse cultural backgrounds that is behind their dynamic and free interpretative style. Founded at the Royal College of Music in London in 1994, the quartet is based in Great Britain. However, the Romanian violinist Corina Belcea and the Polish violist Krzysztof Chorzelski, the two founder members, bring a very different artistic provenance to the ensemble while drawing from the best traditions of string quartet playing received from the quartet's mentors: the members of the Alban Berg and Amadeus Quartets. This spectrum is extended by the French musicians Axel Schacher (violin) and Antoine Lederlin (violoncello). The Belcea Quartet blends its diverse influences into a common musical language.

This diversity is reflected in the Belcea Quartet's repertoire. Regular world premières - among them Mark-Anthony Turnage's string quartets „Twisted Blues with Twisted Ballad“ in 2010 & „Contusion“ in 2014, as well as Thomas Larcher’s „lucid dreams“ in 2015, go hand-in-hand with its profound connection with the great works of the Classical and Romantic periods. The quartet's open-minded approach to music invariably enables it to find its own unique, elegant and refined interpretations of the main string quartet repertoire. The quartet’s regular partners include Piotr Anderszewski, Till Fellner, Valentin Erben and Ian Bostridge.

The Belcea Quartet has shared a residence at the Wiener Konzerthaus with the Artemis Quartet since 2010. The Quartet will be Artist-in-Residence of the new Pierre Boulez Saal in Berlin beginning with the 2017/2018 season. The musicians recently created their very own Belcea Quartet Trust, whose main aims are to support and inspire young string quartets through series of intensive coaching sessions organised according to the needs of each selected ensemble, as well as to support commissioning of new works from today's leading composers to be premiered by the quartet in the future.

The Belcea Quartet has an impressive discography. During its long-term association with EMI Classics, the quartet recorded the complete Britten and Bartók quartets as well as works by Schubert, Brahms, Mozart, Debussy, Ravel and Dutilleux, amongst others. In 2012 and 2013, the quartet recorded the complete Beethoven quartets live in the Benjamin Britten Studio in Snape. This recording was released under ZigZag Territories, the quartet’s new label. As with its predecessors, this CD has been met with critical acclaim: it has been recognized with such prizes as the ECHO Klassik Award. In 2015, the quartet released its highly acclaimed recording of works by Webern, Berg and Schoenberg to coincide with its 20th jubilee. Autumn 2016 sees the release of the quartet’s recording of the complete Brahms string quartets & piano quintet.

The Belcea Quartet's performances of the complete Beethoven string quartets at Vienna's Konzerthaus in 2012 were broadcast by Mezzo TV and were released - on DVD and Blue Ray disk - by the label Euroarts in fall 2014. The release was accompanied by Jean-Claude Mocik's documentary of the entire project, "Looking for Beethoven".

In 2016/2017, the quartet will perform in such venues as London’s Wigmore Hall, New York’s Carnegie Hall, Amsterdam’s Concertgebouw, Brussel’s Flagey and Hamburg’s Elbphilharmonie. The music of the 21st century will also feature prominently in their programs: the centerpiece will be the world premiere of the 4th string quartet by Krzysztof Penderecki.