A concert designed for young people, aged 5 - 100, featuring one of England's finest young quartets.
The quartet will talk about each piece before it is played. The programme will include:

TICKETS: Free for children (over 5 only please), £10 for adults 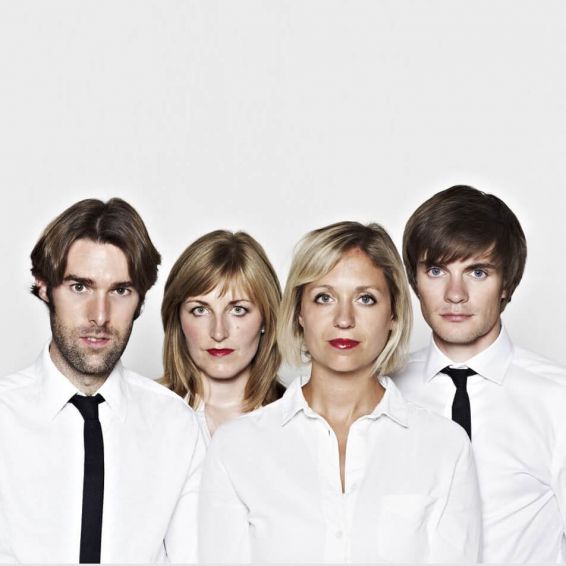 The award-winning Sacconi Quartet is recognised for its unanimous and compelling ensemble, consistently communicating with a fresh and imaginative approach. Performing with style and commitment, the Quartet is known throughout the world for its creativity and integrity of interpretation. Formed in 2001, its four founder members continue to demonstrate a shared passion for string quartet repertoire, infectiously reaching out to audiences with their energy and enthusiasm. The Quartet have enjoyed a highly successful international career, performing regularly throughout Europe, at London’s major venues, in recordings and on radio broadcasts. The Sacconi is Quartet in Association at the Royal College of Music and Associate Artist at the Bristol Old Vic.

Highlights of the 2014/15 season included collaborations with Miloš Karadaglić, Ksenija Sidorova and the Vertavo Quartet as well as performances in Switzerland, Spain and across the UK, including returning to the Wigmore Hall. Other recent highlights include collaborations with Pekka Kuusisto, Freddy Kempf, Mark Simpson and Lavinia Meijer, performances in Germany, Spain, Holland, the Quartet’s debut in Italy and the completion of their second major project at Kings Place, performing the great piano quintets over two years with pianist Simon Crawford-Phillips. The Sacconi performed their 10th birthday celebratory concert at Kings Place to a sold-out hall.

In summer 2015 the quartet embarked on an exciting new immersive project called HEARTFELT. A radical re- interpretation of Beethoven’s iconic String Quartet in A minor opus 132, HEARTFELT pushed the boundaries of chamber music through combining sound, light and touch, for a truly unique performance in which audience members connected with each performer’s heartbeat through holding robotic ‘hearts’. Developed in a unique collaboration with robotics and lighting designers and funded by Arts Council England, HEARTFELT received 4- star reviews from The Guardian and The Independent, and was described by the latter as “a powerful way to experience the visceral physicality of Beethoven’s profound thanksgiving”. www.heartfelt.org.uk

In 2008, the Quartet held the inaugural Sacconi Chamber Music Festival in Folkestone, Kent. Now in its ninth year, the festival is an established event in the cultural calendar and is expanding year on year with challenging programming and exciting collaborations. The most recent festival, entitled “Intimate Voices”, focused on the idea of music as an intimate voice through which we can all communicate, featuring performances with Charles Owen and Chi-Chi Nwanoku, and a performance of The Juliet Letters with frontman of folk band Bellowhead Jon Boden.

The Sacconi Quartet has performed at all the major London venues and has travelled extensively throughout the rest of the UK and Europe. The Quartet toured to the Middle East in 2009, where they were invited by the British Council to give concerts and workshops in Jordan’s capital city, Amman.

Firm believers in the importance of bringing chamber music to the next generation, the Sacconi Quartet dedicates much passion, time and energy to education work. They regularly lead workshops and give school and family concerts as part of the Sacconi Chamber Music Festival outreach programme and the CAVATINA Chamber Music Trust. Their latest project, an educational show entitled The String Thing, with script by Matthew Sharp, went down a storm wherever it was performed.

The Sacconi Quartet has its own, highly successful, record label. Its most recent release, a disc of Czech quartets, was received with widespread critical acclaim, broadcast on BBC Radio 3 and tipped as a classical chart 'Hot Shot' by Classic FM. The Quartet’s debut recording of Haydn’s opus 54 quartets was praised in the press and both their Ravel and Haydn CDs were featured in The Full Works programme on Classic FM. Their 2006 recording of Finzi’s song cycle By Footpath and Stile with baritone Roderick Williams for Naxos was well received in all the national broadsheets and BBC Music Magazine.

The name Sacconi Quartet comes from the outstanding twentieth-century Italian luthier and restorer Simone Sacconi, whose book The Secrets of Stradivari is considered an indispensable reference for violin makers. Ben Hancox plays a 1932 Sacconi violin, and Hannah Dawson an unknown Italian from 1750. Robin Ashwell plays a large Sacconi viola made in New York in 1934, for which he is indebted to Ellen Solomon, and Cara Berridge a Nicolaus Gagliano cello from 1781. Cara and Ben wish to thank the Royal Society of Musicians, a charity which helps musicians in need, for the use of their instruments.