One of America’s most exciting young ensembles, the Eschers are artist members of the prestigious Chamber Music Society of Lincoln Center. BBC Music Magazine, reviewing their recent recording of the complete Mendelssohn Quartets, noted their “...eloquent, full-blooded playing...a beautiful blend of individuality and accord.” Their Hampstead programme features some lesser-performed but outstanding masterworks, including the original version of Samuel Barber's hauntingly beautiful “Adagio for Strings”.

A limited number of FREE tickets are available to 8-25 year olds courtesy of CAVATINA Ticket Scheme. Choose "Rear stalls" or "Side pews" when booking. 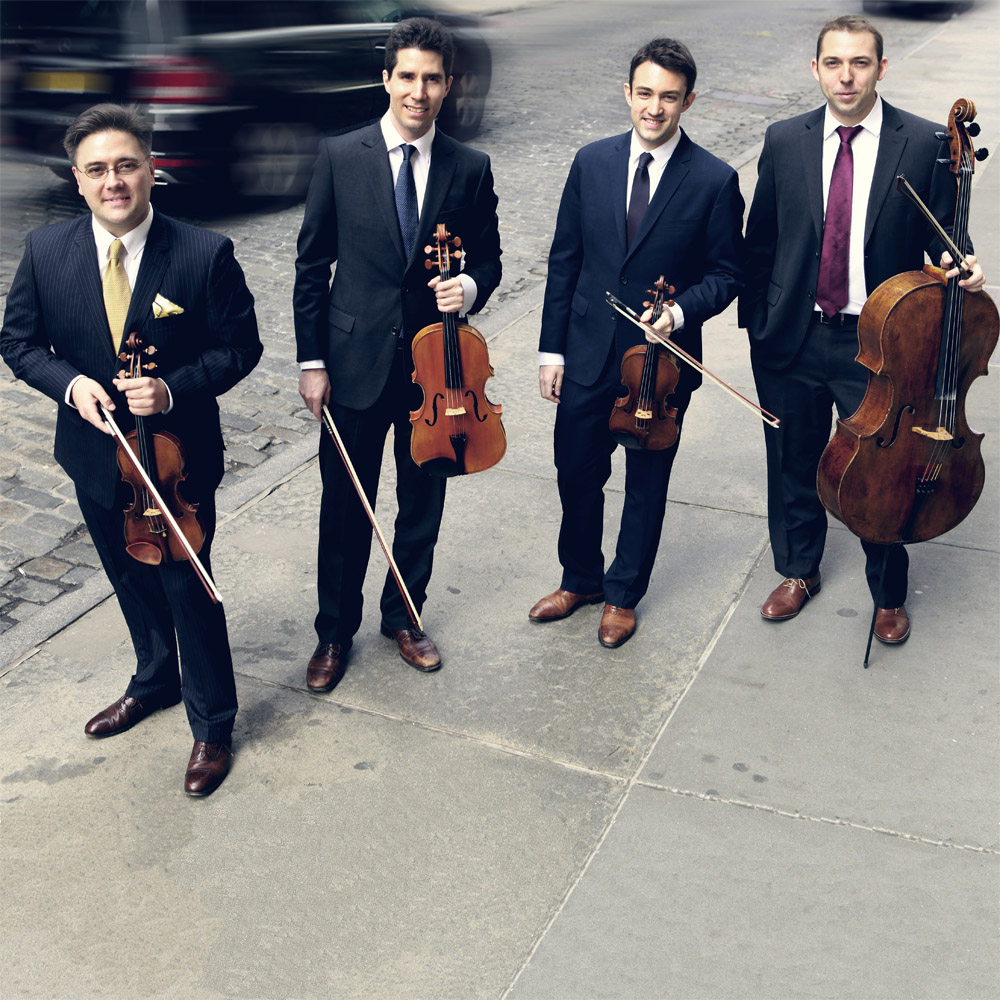 “…a level of individual technical precision and a collective musical purpose that is endlessly compelling… Sheer brilliance”
The Strad, January 2017

The Escher String Quartet has received acclaim for its expressive, nuanced performances that combine unusual textural clarity with a rich, blended sound. A former BBC New Generation Artist, the quartet has performed at the BBC Proms at Cadogan Hall and is a regular guest at Wigmore Hall. In its home town of New York, the ensemble serves as Season Artists of The Chamber Music Society of Lincoln Center, where it has presented the complete Zemlinsky Quartets Cycle as well as being one of five quartets chosen to collaborate in a complete presentation of Beethoven’s string quartets. Last season, the quartet toured with CMS to China.

Within months of its inception in 2005, the ensemble came to the attention of key musical figures worldwide. Championed by the Emerson Quartet, the Escher Quartet was invited by both Pinchas Zukerman and Itzhak Perlman to be Quartet in Residence at each artist's summer festival: the Young Artists Programme at Canada’s National Arts Centre; and the Perlman Chamber Music Programme on Shelter Island, NY. The quartet has since collaborated with artists including David Finckel, Leon Fleischer, Wu Han, Lynn Harrell, Cho Liang Lin, Joshua Bell, Paul Watkins and David Shifrin, as well as jazz saxophonist Joshua Redman, vocalist Kurt Elling, legendary Latin artist Paquito D'Rivera and Grammy award-winning guitarist Jason Vieaux. In 2013, the quartet became one of the very few chamber ensembles to be awarded the prestigious Avery Fisher Career Grant.

Currently String Quartet in Residence at Southern Methodist University in Dallas, Texas and Tuesday Musical in Akron, Ohio, the quartet fervently supports the education of young musicians and has given masterclasses at institutions such as the Royal Academy of Music in London and Campos do Jordão Music Festival in Brazil.

In Autumn 2016, the quartet released the third and final volume of the complete Mendelssohn Quartets on the BIS label. The set has been received with the highest critical acclaim; Volume II was listed in the Top 10 CDs of 2016 by the Guardian and hailed for its “sheer finesse” by Gramophone, whilst Volume III was nominated for a BBC Music Magazine Award. The quartet has also recorded the complete Zemlinsky String Quartets in two volumes, released on the Naxos label in 2013 and 2014 respectively, to accolades including five stars in the Guardian with “Classical CD of the Year”, a Recommendation in The Strad, “Recording of the Month” on MusicWeb International and a nomination for a BBC Music Magazine Award.

The Escher Quartet takes its name from Dutch graphic artist M.C. Escher, inspired by Escher’s method of interplay between individual components working together to form a whole.